Go Back to Shop All CategoriesBeauty ProductsWatches
HomeBlogWatchesSmart Watch, Timely Fashion for Fitness and Health

A device that does not just keep your time but also monitors your fitness and health.

In this digital age, where everything seems to be advanced and things are changing so fast, most of our devices are already called “smart”. We have this Smart TV, Smart Phones, Smart Watch, Smart Glasses, and would you believe, there is also a Smart Refrigerator. Or, was it just I who does not know that there is such a thing as Smart Refrigerator, LOL.

With all the smart devices that we have right now, what we are going to talk about is the smartwatch. So, what makes these watches smart, anyhow? According to the Wikipedia, a smart device are an electronic device that can connect to other devices or network through a wireless protocol such as Wi-Fi, Bluetooth, Zigbee, NFC, LiFi, etc. that can operate interactively and/or independently. Technically, these smartwatches have the abovementioned ability that makes it smart as compared to regular watches.

Smartwatch is paired with smartphones where apps are downloaded to access the features of the watch, though, most of the smartwatches nowadays can work independently without the phone. Of course, it still has the main function of telling the time, but the best feature of these devices is their ability to monitor data needed for fitness and health.

One of the smartwatches I have seen perform its best is the Amazfit GTR 47mm Global Version. It is a smartwatch that features a vintage and classic look. With its style, its not only best for sports but perfectly made for business and casual attire accessories as well.

One of its salient features is its long-life battery that can last up to 24 days for normal usage where all its features are turned on while it can last for up to 74 days on a basic watch mode, turning off its Bluetooth and other features.

The watch has a 12 sports mode where it can provide accurate data for that the user’s needs. It is integrated with the BioTracker PPG biological tracking optical sensor and an algorithm developed by Huami that offers advanced full-scale heart-rate monitoring. It alerts the user whenever the heart rate is out of normal range while exercising. It is also waterproof for up to 5ATM or 50 meters deep.

The watch has also a version for women’s use. It is the Amazfit GTR 42mm Smart Watch. The dimension is much smaller than the GTR 47mm most of its functions are the same. 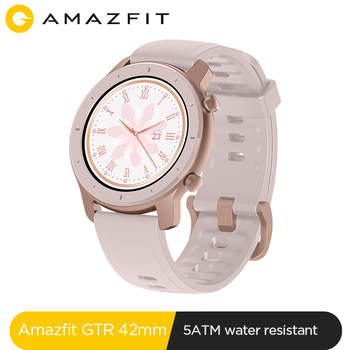 Thanks for sharing your thoughts. I really appreciate your
efforts and I will be waiting for your next post thanks once
again.

What i do not realize is actually how you are not really much more well-liked than you might be right now. You are very intelligent. You realize thus significantly relating to this subject, produced me personally consider it from numerous varied angles. Its like women and men aren’t fascinated unless it’s one thing to accomplish with Lady gaga! Your own stuffs great. Always maintain it up!

It’s enormous that you are getting thoughts from this article
as well as from our discussion made here.

Hiya, I am really glad I have found this info. Nowadays bloggers publish only about gossip and internet stuff and this is actually frustrating. A good web site with exciting content, this is what I need. Thank you for making this web site, and I’ll be visiting again. Do you do newsletters by email?

Cancel reply
Stay up to date
Register now to get updates on promotions and coupons.